When I focus the camera’s lens then press the shutter I feel a tinge of nervous anticipation. I hope I’ve captured a beautiful moment in time at Magnolia Plantation and Gardens that will never occur again as long as time exists.

My eagerness to see the picture is mixed with reverence for the garden’s beauty and the sacrifices of those who’ve shaped the landscape before me. My thoughts turn to the enslaved people who toiled in the soil generations ago. Black hands sculpted the land into an inspiring place for inspiring pictures.

This once-raw land along the Ashley River is a living canvas. On that wilderness the enslaved used crude tools to build dikes bordering a wildlife-laden swamp. They dug black-water ponds reflecting Magnolia’s color. They planted today’s mature azaleas, tall camellias, and aged oaks that arch over the entrance. Many of them are unknown. Others are still remembered at Magnolia.

That’s their unintended gift to us, a scenic backdrop that draws photographers to America’s oldest garden. The white owners got the credit. Then freedom came. A new generation of black hands in the soil followed with equal passion to care for Magnolia’s living canvas.

Like the gardeners before them, today’s African-American garden staff at Magnolia — people like Isaac Leach and his younger brother Teddy Leach — are more than just the muscle that drag off fallen trees. They understand plant science, the flow of river water for irrigation and the hidden places where fresh water springs from the earth.

They know it because they’ve witnessed the seasonal changes on this landscape where they’ve lived since birth. Four generations of Leaches have either lived or worked at Magnolia. Their father, the late Johnnie Leach, Magnolia’s revered senior gardener, raised his family in one of the former slave cabins. Before that, Mr. Leach’s father Willie Leach was a superintendent of the gardens in the early 1900s.

Isaac Leach likens himself to a painter who uses plants to produce a “picture-perfect” garden. Memory guides him as he maintains the landscape as it was in his childhood.

Teddy Leach says, “We grew up here. It is in our blood. We see trees today at Magnolia that our father planted when we were children,” like the towering pines that partition the parking lot. If trees remind them of their father, the land is a reminder of those who worked the land in slavery to make something beautiful. “God created the land,” Teddy explains. “The enslaved maintained it and added to this canvas.”

But the plants on that canvas aren’t always respected, Teddy laments. He becomes furious when he mentions people who pull unopened buds from plants. “Give it a chance to bloom,” he demands. “Let it do its job!”

Like me, these protective gardeners wonder if Magnolia’s visitors know who is truly responsible for what they see. That’s a difficult story to tell sometimes because of the stain of slavery. For the Leaches and others who maintain this living canvas, however, they do so knowing they’re carrying on the legacy of the men and women who came before them.

One of them who came before them – the Rev. Adam Bennett – was enslaved at Magnolia but rose to garden superintendent after Emancipation. Charleston resident Deborah Grace is Bennett’s great-granddaughter.

“When I think of Magnolia, I liken it to the book of Genesis where the earth was void, then, out of nothing came something,” says Grace, who like the Leaches also lived as a child at Magnolia. The land was shaped by people who were brought here not by choice, she says. “With bound hands and feet, they had only the freedom of mind to add beauty to this canvas.” 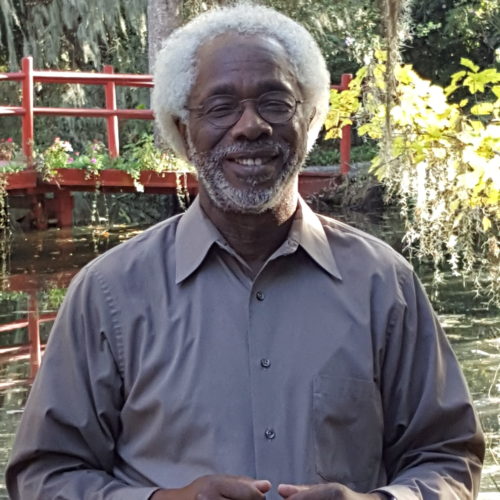 Herb Frazier formerly served as the public relations & marketing manager at Magnolia Plantation and Gardens. Before joining Magnolia, Frazier edited and reported for five daily newspapers in the South, including his hometown paper, The Post and Courier. In 1990, the South Carolina Press Association named him Journalist of the Year. He has taught news writing as a visiting lecturer at Rhodes University in South Africa and is a former Michigan Journalism Fellow at the University of Michigan.