Gullah food is one of the oldest world traditions being practiced in America today. It is about ancestral ties and American living, adaptability, and creativity. It is rooted in the crops and preparation methods brought here from Africa and further evolved from a history of poverty and learning to “make do”. Cooking methods were passed down without written documentation.  Gullah cooks today pride themselves on their ability to season and judge quantities simply by experience.

The Africans brought to the Carolina Colony used the similarities between the culinary environments of the Lowcountry and the African West Coast. Consequently, their cuisine is characterized by the consistent use of rice. Vegetables such as yams, peas and beans were introduced to the New World and then cultivated by slaves.  Preparation of foods in the “Big House” would have involved access to more pots, ovens, expensive seasonings and perhaps sauces. The better cuts of meat would have been eaten around tables by upper and middle class whites.

In the slave dwellings though, those lucky enough to have one pot were preparing their foods a little differently. A single pot would have cooked those pieces of meat too lowly for others along with rice, vegetables and whatever seasonings were available. Under the pot yams could be cooked in the ashes and over it perhaps some game smoking.

The influences of Gullah can been seen in present day Charleston. If you were to peruse many restaurant menus you will see versions of these dishes throughout. These dishes would include the following. Pirlo, which is the epitome of a rice-culture based one-pot dish. The purloos and gumbos were brought with the Gullah from their African cooking fires.

Beaufort boil, Beaufort boil or stew, or Lowcountry boil, is said to have originated on St. Helena’s Island, one of the South Carolina Sea Islands that was once home to many Gullah. It’s also called Frogmore stew. Frogmore was a little cross roads town that didn’t have much more than a post office. The traditional ingredients are shrimp, corn, sausage, and potatoes. If you’d had luck crabbing, you’d add whole blue crabs.

Catfish and oyster stew, back in the day, catfish came from salt water. Now they are farm-raised. They are still one of the least expensive fish, and so are perfect for stretching a stew. Vegetables coming straight from the garden always play a part in Gullah cuisine, further enhancing the one pot cookery the cuisine is known for. 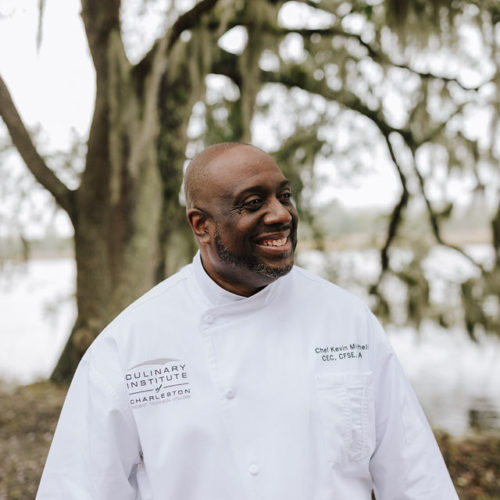 Kevin Mitchell has been a Chef Instructor at the Culinary Institute of Charleston since 2008. A graduate of the Culinary Institute of America, he also earned a masters degree in Southern Studies from the University of Mississippi, where he focused on Southern Foodways, the preservation of Southern ingredients, and the history of African Americans in the culinary arts. In August of 2016 Chef Mitchell became a Nathalie Dupree Graduate Fellow of the Southern Foodways Alliance.